Conditions of Use
All comments regarding the life and work of Lawrence Durrell are welcome. Say whatever you like, however you like. Comments are not censored, but they reflect the views of the commentator and do not necessarily represent the opinions of the administrator nor anyone else on this blog. All comments are copyrighted and belong to the blog. Fair use of the blog's material requires proper attribution both to the blog and to the commentator.

Kennedy Gammage has a couple of questions:  "Durrell lived in India until he was eleven, but he never wrote about it.  Why? — if it made such a big impression on him.  Did he ever go back there?"
Posted by bredwine at 9:22 AM 1 comment:

One of Durrell's favorite expressions is "my mind's eye," made famous at the beginning of Justine (1957):  "In a flash my mind's eye shows me a thousand dust-tormented streets."  What does he mean by "mind's eye?"  Memory?  Imagination?  Inner vision?  The third eye of Hinduism and Buddhism?  All these at once?  The meaning will vary according to context, but the expression itself leads to a discussion of mind in Durrell.  Dr. D. quotes from Osho in his Kyōzan:  A True Man of Zen (1988):  "According to Gautam Buddha — and confirmed by all the awakened ones — we are divided into three parts:  the body, the mind, the being.  And every part has its own mind" (p. 48).  I tend to be a pragmatist in these matters and think the Buddha is using "mind" in a sense that doesn't make sense to me.  It's too imprecise.  In my opinion, mind or consciousness is not part of the physical body.  So I'm essentially a dualist:  mind and body are separate.  That's my problem.  But was it Durrell's?  That's my question.  —  BR
Posted by bredwine at 10:58 AM No comments:

[Patrick] White was a strange character.  When he went into the city to shop or have lunch, he wore suits but with a beret and or scarf (rather Parisian boho).  At home he was more casual in trousers and button down short leave shirts.  In the 60s and 70s affecting a European boho look was common amongst artists and intellectuals many of whom had done the London and Paris sojourn before returning to their native shores.

I think White came to terms with his homeland, but he said he never felt particularly Australian.  What does that mean?  With Australia Day coming up on January 26th, there is of course the usual media debate about what it means to be Australian.  Of course what they are often trying to get is a sense of national conformity within a multicultural context.  I am Australian, but I don't need to prove it by wearing shorts, thongs (not the kind you are thinking of), and firing up the barbie or playing beach cricket.

Is there a certain national outlook?  I don't know.  What does it mean to be American these days?  I have always been sceptical about national identity and false patriotism — the refuge of scoundrels.  My parents and grandparents were born here.  I was born here and have lived most of my life here.  No more to be said.  Durrell lived in many places, but I think he found a home in Provence.  How he really thought of himself is worth investigating.  He liked to think of himself as "European," and yet Gordon Bowker [in his biography of LD] says he lived in a "Tibet of the mind."

"Himmelfarb the outcast grew from his own (White's) sense of being always a stranger:  first as a child with what kind of strange gift nobody quite knew; then as a despised colonial boy in an English public school; finally as an artist in horrified Australia."

"I know that a great many native-born Australians (and nothing can be more ignorant that certain native born Australians) who go out of their way to encourage New Australians (migrants) to drop their own standards in favour of the dreary semi culture which exists here at present.  However, there are also a great number of civilised Old Australians who are hoping that the migrants from European countries will bring something of their own cultures with them, so that we can incorporate them into what will someday be a true civilisation of our own."

There is some stuff here that applies to Larry:  despised colonial boy, exile from his own land, stranger in a strange land, etc.  White saw in 1950s Australia something of the Pudding Island that Larry saw in England of the 30s and 40s.  White's words are prophetic:  the European and now Asian migrants are transforming Australia into a vibrant hybrid culture which is generally a positive thing, although there are a few ragbags out there.
Posted by bredwine at 12:45 PM 1 comment: 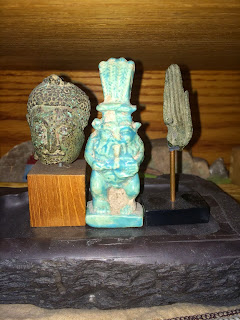 Dr. D. provides the following quotation which illustrates the similarities between Hesse and Durrell:

"Each man had only one genuine vocation — to find the way to himself . . . His task was to discover his won destiny — not an arbitrary one — and to live it out wholly and resolutely within himself.  Everything else was only a would-be existence, an attempt at evasion, a flight back to the ideals of the masses, conformity and fear of one's own inwardness."

A New Year's message from Dr. D., founder of the AALDS:

— unidentified source, probably from a treatise on psychology


Dear Durrellists...
This quotation reminds me, and perhaps the AALDS collective mind, to reflect more over of Larry's [Lawrence Durrell's] parenting style quite apart from his spousal relationships. He loved his children and youth. I understand he was quite entertaining and regularly had children enthralled with melodramatic faces and singing.
Wishing all those Durrellists out there across the globe a very Happy New Year and may the four seasons of 2014 sweep you gently through much joy, flowers, fruit and song.
Agape,
DrD
Posted by bredwine at 9:14 AM 1 comment: